‘Food for All’ campaign unifies Caritas to end hunger

“I lift my voice for those who have no bread” was the song beginning the Caritas General Assembly’s session about its “Food for All” campaign, a worldwide Caritas initiative to help farmers, lobby governments, and end hunger by 2025.

During the morning of 15 May 2015, dozens of Caritas leaders lifted their voices, discussing how to help families feed themselves. They shared success stories from the “Food for All” campaign, which began in December 2013 with the support of Pope Francis. 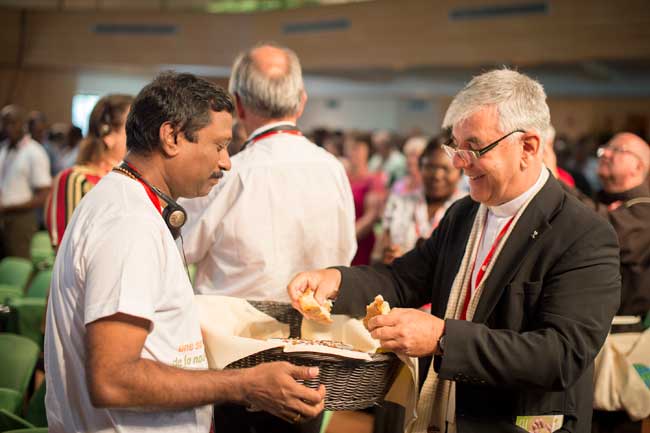 Caritas leaders from around the world break bread at a General Assembly session about the “Food for All” campaign. Photo by Elodie Perriot/Caritas

Monsignor Giorgio Bertin, who leads Caritas programmes in Djibouti and Somalia, said “I never saw so many happy faces” as when Caritas organised a communal meal for young people as part of the campaign. Monsignor Bertin noted that the feeling was not of giving charity, but of a family meal. He also discussed successful programmes for women farmers in Somalia.

Caritas leaders covered topics ranging from gardens in the Pacific island of Tonga to advocacy in Guatemala to the challenges that hungry families face in the drought-prone Sahel region of Africa. Juana Bertha Duarte Somosa, representing winners of Caritas’ Women, Sowers of Development prize, spoke of a woman farmer in Nicaragua who considered migrating to a neighbouring country because of poverty, but was able to feed her four children thanks to training, seeds, and irrigation supplies she received from Caritas. She also spoke of positive social changes that the farming programme brought about. “At the beginning of our work with the communities, the women were usually silent. Now they are expressive.” Michel Roy, Secretary General of Caritas Internationalis, said that one finding across the board from all Caritas members is that women must have access to land, water and other resources needed to grow food.

Representing North America, Kathy Brown mentioned the Sow Much Love campaign of Development and Peace (Caritas Canada), which draws from the food campaign themes, particularly regarding small farmers’ right to seed sovereignty. Brown also spoke of hunger in the United States, “a land of plenty.” Her words were echoed in a video about food pantry work in Maine, USA, where many people are in need.

Helene Unterguggenberger of Caritas Austria spoke of Caritas’ work to lobby members of the European Union Parliament to make access to food a legal right. “The future of the campaign is the right to food,” agreed Juan Carlos Velasquez of Caritas Bolivia. “This right has to be enshrined in the laws of the countries.”

Monsignor Gerard Burns, representing Oceania, noted that the focus should be “not just more food, but the right food”—food that promotes good health.

Helping families to grow enough food or earn enough to buy food is at the heart of Caritas’ work. But during crises like natural disasters and wars, food distribution is essential. Father Raed Abusahlia of Caritas Jerusalem talked about the five truckloads of food they were able to gather for Gazans sheltering in churches during the summer 2014 conflict. “We had calls not only from Christians, but from Muslim and Jewish organisations, saying, ‘How can we help? Will you be our channel?’ People trusted Caritas to reach poor people.”

An audience member asked panel members what to do about food for people living in informal settlements with little room for gardens. Panelist Jacques Diouf, former head of the UN’s Food and Agriculture Organisation, mentioned table gardens as one alternative. John Jirawatt Chenpasuk from Caritas Thailand suggested an approach that has worked in refugee camps on the Thai border. “Grow food vertically,” he said. “We have plants hanging down from the roofs.”

Caritas agriculture and nutrition programmes helped more than 106 million people in the world in 2013, even before the campaign started. The “Food for All” campaign draws on existing expertise and has given momentum and focus to Caritas’ efforts. Caritas staffers in more than 100 countries have united to focus on people who are suffering from hunger or frightened about how they will find food tomorrow. From the Pacific Islands to Africa to Latin America, Caritas has succeeded in building a world with more food for all.