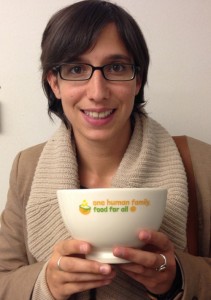 MEP Elly Schlein holds a “Food for All” bowl to show her support.

In Europe and many other regions, the Caritas “Food for All” campaign involves asking government leaders to think of the hungry when passing laws. Caritas Europa’s efforts to rally members of the European Parliament (MEPs) around our global food campaign have yielded important results. On 25 November 2014, the European Parliament approved a motion saying there is a “need to go beyond food security” and that it “considers food as a basic human right.” The motion also endorsed a ‘Zero Hunger’ goal “to end the scandal of hunger by 2025.”

“This is a huge reward for the great efforts of the Caritas network,” says Silvia Sinibaldi, Caritas Europa’s Policy and Advocacy Officer. “Thanks to the national organisations, Caritas Europa was able to present more than 10 amendments (out of a total 400). It is clearly thanks to this effort that the ‘Right to Food’ appears in the final document.”

To show their support, many members of the Parliament were photographed holding a “Food for All” bowl.

Read more about the motion on the Caritas Europa website.