Kumara and giant yams sustaining life and livelihoods in Tonga 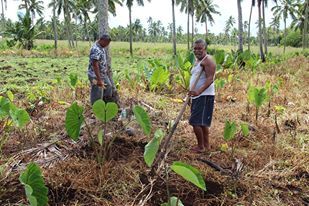 There is a saying in Tonga that “the measure of a man’s wealth is not in monetary value but by his root crops and pigs.”

Funaki Vehekite, 53, grows food crops such as kape, taro, yam, cassava and squash at his farm in Tongatapu, Tonga’s largest island. It allows him to support his family and keep his five children in school.

Funaki is the secretary of a farming collective called the St Anthony of Padua group, which is part of Caritas Tonga’s sustainable livelihoods programme.

With funding from Caritas Aotearoa New Zealand, the programme aims to boost the income of over 400 families in Tongatapu and Vava’u by providing small loans which farmers can use to set up micro-enterprises.

Community members are trained in business management, produce development and marketing so that the income they gain will allow them to become financially independent.

“Caritas Tonga’s Sustainable Livelihoods programme is our way of helping poverty stricken families in Tonga,” says Sr Senolita Vakata, director of Caritas Tonga. “We support poor farmers who cannot afford any collateral for their loans and otherwise would have no other way of acquiring financial support either from a bank or other private institution.”

Funaki mainly produces food for his family, however he also markets his crops so he can cover his children’s school fees.

“Farming can produce big outputs if carried out correctly,” says Funaki. “But for me, it’s also important that my children work with me and start to like farming so they can continue working the plantation when I’m no longer here.”

Caritas Tonga supports Funaki’s farming group by lending seed capital at a competitively low interest rate of 3 percent (standard rates can be as high as 25 percent). The seed capital is used to cover the cost of clearing and ploughing land in preparation for planting crops. This is usually very expensive as farmers have no ploughs or tractors and they have to hire them.

Funaki is aware of the risks of the extreme weather events brought about by climate change and he has adapted his farming practices accordingly. “I grow a particular yam called ‘Ufi Lose’ which can survive cyclone weather.”

Funaki and his group harvested over 3000 giant yams last December. They sold many of them but the rest they kept for their community, particularly those who were vulnerable such as the elderly and disabled.