As part of the “One Human Family, Food For All” campaign, Father Larry Snyder of Catholic Charities (a Caritas member in the USA) issued the Share Your Plate challenge. Father Larry invites us to make a simple, inexpensive, nutritious meal and send in a photo of it.

By reducing the cost of our meals, we become aware of the challenges millions of people around the world face when they must feed their families on a small budget. By saving on our own meals, we can also consider giving to groups that help the hungry.

Responding to the challenge, Chef Francesca Cicchinelli (whose husband is the Emergency Team Coordinator at Caritas Internationalis in Rome) made a traditional Italian dish that is filling and very low-cost. For less than 3 euros, she made a delicious, hearty bean and pasta soup that fed her family of five–with plenty left over for coming days. Scroll down to read about how she did it–then try the recipe yourself. 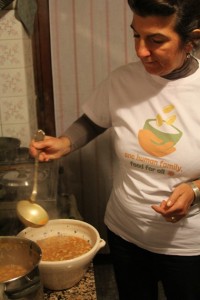 “Beans are the meat of the poor man,” goes a popular saying about the staple food. One recipe known around the world is pasta e fagioli, a hearty bean and pasta soup that can be found in pretty much every area of Italy. This version shared by Chef Francesca Cicchinelli has a unique Roman flair with the addition of pepperoncino (red chili flakes), often found in Rome’s pasta dishes.

Roman or otherwise, no Italian cook prepares pasta e fagioli without the addition of sautéed carrots, celery, and onion. After sautéing the vegetables to a golden brown, Francesca adds a fresh sage leaf and pours on the tomato sauce, eyeballing the approximate measure for the dish: less things to wash up later! The cooked beans are added, and are left to stew in the fragrant tomato sauce.

Romans tend to eat more dry pastas (pastasciutta), but Francesca opts to make simple, fresh pasta dough that gives her version of this rustic recipe a more elegant touch. After adding the water into the center of the measured mound of flour, Francesca incorporates the water and extra-virgin olive oil into the flour with a fork, forms the dough into a ball, and then lets it rest—letting the dough rest allows the proteins that have developed to relax, resulting in lighter pasta. Once the pasta dough has been cut into small squares, it is best to let them dry a bit, so that they don’t break down when added to the boiling soup base.

Francesca serves her pasta e fagioli along with a mixed salad and crusty bread. Her rendition of this classic recipe transforms a dish consisting of the “poor man’s meat” into a homey yet refined meal that is definitely satisfying. Buon appetito!

Soak the beans in water overnight.

Boil the beans in the water for at least 1 hour, until soft. Take out the beans and set to one side. Do not throw away the water in which you boiled the beans, as you will need it later.

Dice the vegetables. Put them into a pan with oil. Sauté them for 5 minutes, then pour the tomato sauce in. Let this mixture for 30 minutes, then put in the beans and let cook for another 30 minutes. Add water if the sauce become too dry.

Put the flour in a mound on the table, then make a little hole in the mound, like a volcano. Gradually add water and tablespoons of oil. Mix together with a fork, then make a ball of pasta with your hands. Put the ball into a clean cloth “to rest” for 30 minutes. Roll out the pasta with a rolling pin. Fold the flattened pasta. Cut it into strips and then into little squares.

Put the sauce into the water where the beans were boiled. Add salt and chili pepper to taste. When the water is boiling, throw in the pasta and cook for 5 minutes.

When it is done, ladle into bowls and eat very hot.