‘Hunger is finished here’: the Caritas food campaign at work

“When I was around 12, we’d only eat once a day,” says Tulsi Ram, a young man living in a village in central India. “My head would spin and I’d be weak from hunger.”

“There’d be times when I was hungry for two or three days. It burned in my stomach,” says Suresh, a 35-year-old double amputee and father of two. After he lost his legs, “there was no way to earn food,” he says.

Tulsi Ram suffered hunger when a boy, after his father died. Photo by Sheahen/Caritas

“In Kerala, if you don’t have enough food, you don’t let people know.” Mani Kavilpara, a farmer in southwest India, has neighbours who became desperate after their crops failed. “You get dressed, you smile, even if you are hungry.”

All the smiles in the world can’t keep it a secret that hunger is a major problem in India. The country has some of Asia’s highest malnutrition rates for children, and millions of adults there suffer too.

Many families in India farm other people’s land, getting only a small share of the harvest or the profits. Even when farmers own their own land, they rarely make money—or even enough to feed themselves. As in all parts of the world, life for farmers is a constant struggle against the elements. Pests, drought, floods, and other disasters can wipe out a family’s only hope of food.

Kanihya Lal and his wife Siyarani managed to buy a small patch of land years ago. It was cheap because it was so rocky; they spent years trying to clear the land. “Those times when we were prying out the rocks—there were some days we had nothing to eat,” says Siyarani. “We’d give the kids one meal a day and we’d eat nothing.

When the alternative is hunger, some tenant farmers migrate for work. In a village near Bhopal in central India, “It wasn’t severe—no one died,” says Nana Bai. “But people were hungry.” Mrs. Gamta Bai recalls a season when “there was no crop. We didn’t have any food to eat. We had to migrate for work and had no place to live,” she says. “We’d sleep in the field on old feed bags. The ants bite you and crawl in your ear.” 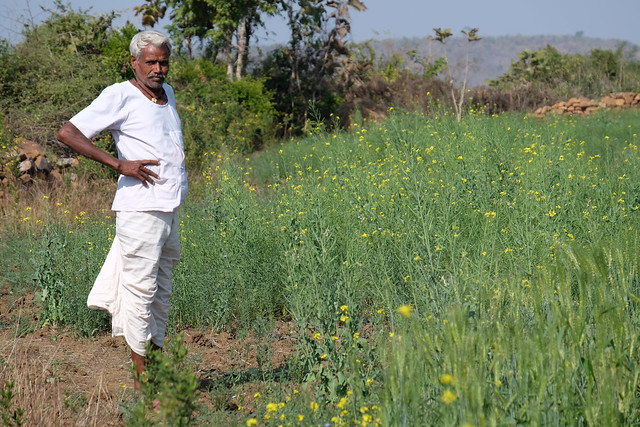 Caritas India is helping farmers grow more food even when conditions are difficult. Caritas distributes seeds, teaches farmers how to make cheap, safe pest repellents, and makes sure they aren’t wearing out their soil. “There’s something called DAP–diammonium phosphate, a fertiliser,” says Mritunjay Pandey, former village coordinator for a Caritas India programme. “They were using it incorrectly. If they go for soil testing, they may learn they’re overusing it.”

Caritas encourages farmers to use organic methods that will protect the environment, so farmers’ land will be fertile for years to come. Such methods save farmers money, too. “Earlier, I used DAP and urea. I spent 4000 rupees per year,” says Damodar Kurmi, a farmer whose acres of wheat fields are now fertilised by cow urine using a well and pump he’s set up for the purpose. “Now, I don’t spend a single rupee.”

“I got 5 kilogrammes of seeds for free from Caritas two years ago,” he says, looking out at his green fields. “And it’s been performing well. I started to have my own seed. I don’t buy seeds anymore.”

Over time, more farmers turn to Caritas to share advice and learn practical methods. “The best thing is that people have started calling us,” says Pandey. 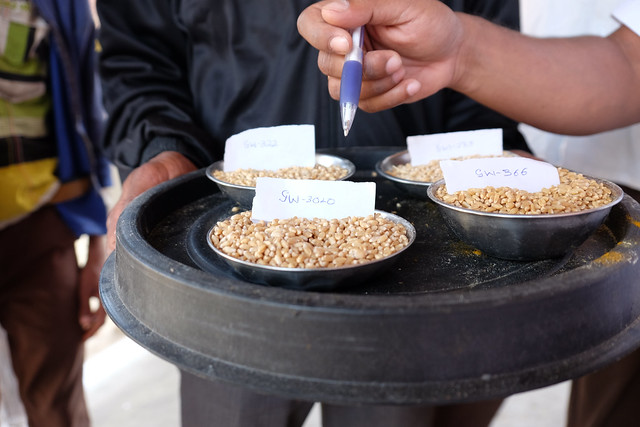 In villages near Sagar in the Indian state of Madhya Pradesh, families learn how to grow more food thanks to SAFBIN, an adaptive farming programme funded by Caritas Austria. Photo by Sheahen/Caritas

Caritas also works with local government, like village health workers and nutrition centers, to make sure children don’t go hungry. “We found four kids malnourished,” says Pandey. “We urged the parents to take them to the hospital.”

“Here about 12 children are malnourished. They are thin. Their stomachs become big,” says Saima, a Caritas coordinator. “If we find out a child is malnourished, we go to the anganwadi [village health worker]. Then they’re referred to a nutrition resource center, where they get food for 15 days.”

Caritas runs self-help groups for women that teach them about basic health issues and encourage them to get help. “Earlier we didn’t have much food,” says Sima Bai. Her baby son was underweight. A Caritas group taught her that she needed to eat enough to breastfeed properly. “I wasn’t aware I needed to focus on my own food,” she says. A Caritas livelihoods programme also helped her family earn more; now mother and son are doing better.

Caritas’ farming, livelihoods, and nutrition programmes are beating back hunger in communities throughout India. Energised by the global “Food for All” campaign, Caritas India has helped thousands of people go to bed with food in their stomachs. 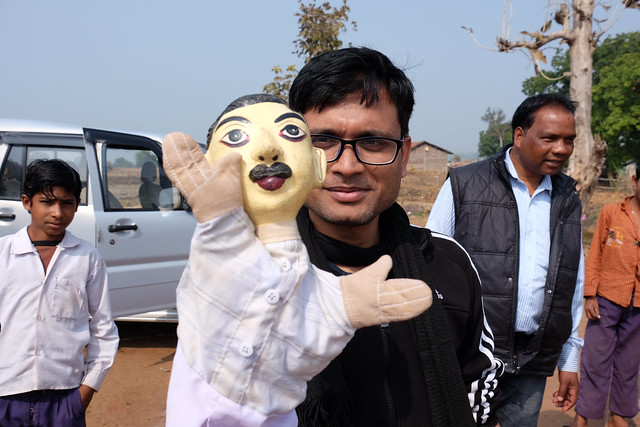 In villages outside of Bhopal in the Indian state of Madhya Pradesh, the Caritas programme Jeevika uses puppet shows to teach communities about livelihoods. It links impoverished families with government programmes and helps them earn a living. Photo by Sheahen/Caritas

Siyarani, who remembers the years of prying rocks out of her plot of land, works with her husband to use the farming methods he learned at Caritas trainings. “Today we’re eating happily,” she says. “We eat three meals a day.”

A local diocese gave Suresh, the amputee, some chickens and mobilised Suresh’s teenage neighbours to build a coop. Now he sells eggs and grows other food on his tiny plot of land.

Tulsi Ram, the man who remembers the dizzying hunger of his youth, is now 25. Caritas started a seed bank and a farmer-led group to test which crops grow best in his village. His mother grows so many potatoes that she has lots to sell. “Now we’re able to eat at least twice a day, and there’s more variety,” he says. “Every day we have different vegetables.”

Gamta Bai, who migrated and slept in fields on feed bags, says “We won’t have to do that again.” Looking round her village with satisfaction, she sums it up: “Hunger is finished here.”