How the EU can champion the fight against hunger 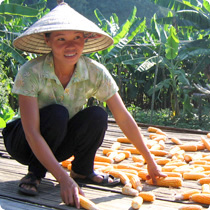 The European Union should support the eradication of worldwide hunger as a priority for the post-2015 agenda, and push for a clear definition of a “Zero Hunger” goal, addressing all the root causes of hunger, in particular those that are a result of policies pursued by the European Union.

This is among the key messages in a new, in-depth report on Food Security and the ‘Right to Food’ that Caritas Europa presented at the European Parliament in Strasbourg today. The report includes a series of recommendations on how to create sustainable food systems with the goal of ending world hunger by 2025.

“Nobody should die because of lack of food; nobody should suffer hunger. This is a moral imperative of highest priority for all decision makers in a global society. Failing on this is failing on being humane,” says Jorge Nuño Mayer, Secretary General of Caritas Europa.

In this report – “The EU’s Role to End Hunger by 2025” – Caritas Europa is addressing six main topics of utmost importance, calling on the European Union and its Member States to take action in the following areas: Right to Food –Agriculture – Climate change – Nutrition – Resilience – Policy Coherence for Development.

Ending hunger cannot simply be done by supplying enough food for everybody. The structures that prevent people from self-sufficiency must be changed. Experts such as Olivier De Schutter, UN Special Rapporteur on the Right to Food, agree that the root causes of hunger and malnutrition stem from disempowerment, marginalization and poverty. People are not hungry because we produce too little; they are hungry because they cannot afford the food that is available on the markets, or lack access to resources to produce it sustainably themselves.

At the heart of the mission of Caritas lies the dignity of the human being. Hunger is the basic manifestation of poverty and a violation of basic Human Rights. It is not only a matter of right to food, but also the right to life and human dignity of the millions of people who starve every year. Eradicating hunger is the basic requirement for every human being to live in a dignified and meaningful way. Caritas Europa believes that hunger, food insecurity and malnutrition can and must be ended irreversibly by 2025.