A major independent survey of Caritas groups around the world points to the best way to end hunger – help small farmers, especially as they try to adapt to the changing climate.

The survey was presented by Cardinal Oscar Rodriguez Maradiaga, outgoing president of Caritas Internationalis, to Cardinal Luis Antonio Tagle, incoming president, at the EXPO 2015 in Milan.

According to 98 Caritas organisations, the national Catholic charities in countries comprising 83 percent of the world’s population, the top three causes of food insecurity are lack of resources – land, seeds, loans, access to markets – for small farmers, low agricultural productivity, and the impact of climate change. 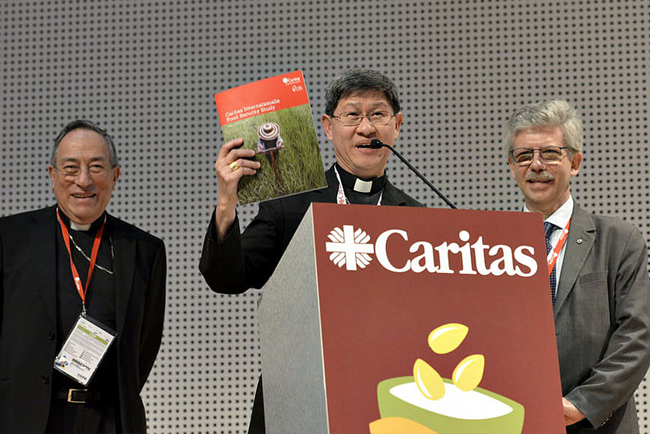 Caritas Day at Expo Milan 2015, where Cardinal Maradiaga, Cardinal Tagle and Michel Roy unveiled a Food Survey about the causes and solutions to hunger. Photo by Simone Stefanelli for Caritas

“The findings of this survey are a window into the struggles of impoverished small farmers, especially those in the developing world,” said Michel Roy, Secretary General of Caritas Internationalis, the Rome-based umbrella group of national Caritas organisations. “Many Caritas groups report a lack of food security. The global community needs to do more to fight hunger and malnutrition.”

Dr. Carolyn Woo, President of Catholic Relief Services (CRS) said, “this survey echoes what we are told daily. We know how hard small farmers struggle to put food on the table year round and how climate change is making farming even more difficult for them, they tell us.” CRS partnered in the survey’s creation.

The results of food insecurity were not just hunger and malnutrition, but also migration, income disparity, and crime. Lack of adequate food impacted not just health and mortality, but also education, corruption and a culture of dependence on handouts and welfare.

Though the responses as to how to address hunger were wide ranging, over a third of those responding to the survey said the single most important action that would reduce hunger, malnutrition, and food insecurity is improving agriculture (35%). Seventeen percent pointed to changing economic or social welfare policies (17%). “This clearly shows that solutions need to address local circumstances,” said Dr. Woo.

Caritas estimated that an average of 106 million people had benefitted from its food and agriculture programmes in 2013. The top areas of focus were farmer training (41%), sustainable agriculture (39%), food or seed distribution after emergencies (39%), and improving nutrition and health (39%).

There were significant variations among regions in the reasons for hunger and food insecurity. Caritas offices in Sub-Saharan Africa emphasized low agricultural productivity and climate change more than people did in most other regions. In Asia, the emphasis was on lack of smallholder farmer access to resources, plus the lack of governance. Respondents in Latin America and the Caribbean shone the spotlight on food price speculation and lack of infrastructure. Middle East and North Africa struggled more than most with conflict and lack of clean water.

Caritas Internationalis is a global confederation of Catholic relief and development agencies operating in over 200 countries and territories worldwide. The study was carried out by Caritas Internationalis, Catholic Relief Services, and Grey Matter Research & Consulting. Ninety nine out of Caritas’ 160 member organisations took part in the survey.