From pigs to bigger things in India 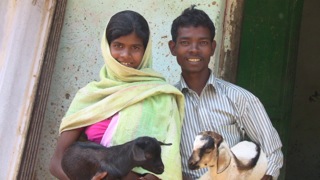 At just 18 years old, Shiva Ram Kisan has experienced more of the ups and downs of life than some people will in a lifetime. He lost his mother when he was only 5 years old and his father when he was 14.  Lonelieness, poverty and an empty stomach were no strangers to him.

But from humble beginnings, Shiva now is a happily married, successful small farmer and livestock breeder, admired and respected by his neighbours in the village of Sundridih in India’s eastern state of Jharkhand. “It is very painful for me to remember all that happened to me. But, every day I also remember that nothing is impossible. If you have some confidence in yourself, you can make it. That’s what I remind people all the time.”

Shiva is also grateful to Caritas India, whose agricultural training projects and small start-up gift of two piglets gave him the chance to emerge from his difficulties. Shiva had had to borrow money to bury his father. To pay it back he was forced to leave school and become a bonded labourer. This meant that he was paid in meals by the family he worked for. But Shiva says,

“At least 6 times every month I went to sleep with an empty stomach. As soon as I could, I went to work building roads  – the pay was little but at least it was pay. I also found a small piece of land to cultivate to feed myself.”

His village nominated Shiva for help from a Caritas India programme, where he initially became a community mobiliser and then received agricultural training and the two piglets.  When he got his first income from his small piggery, Shiva wisely invested in putting a roof on it. He and his wife Sumitra, who is also 18, now have 10 pigs and have begun raising cows and goats. They have also brached out into growing organic vegetables like brinjal, tomatoes and gourds, fruits like litchee and pomegranate and herbs like chilli pepper and coriander.

Shiva and Sumitra have recently bought a second hand motorbike. As the better farming techniques they learned from Caritas India’s training gives them a surplus to sell, they can now get their goods to market much more easily.  “I am so happy to be working in partnership with my wife Sumitra,” says Shiva. “She helps me with all the work and we eat 3 times a day. We are self-reliant now. ”

Shiva has now also been trained by Caritas India in how to produce lac – a natural, biodegradable hard resin produced by a pest insect which thrives on weeds on degraded land.  The tiny red–coloured larvae of the insects secrete a thick fluid which is then scraped off and dried.  The resin is used by the electrical and pharmaceutical industries as a coating and it is even used to preserve archaelogical and zoological specimens. Shiva says, “Lac is the perfect standby crop for us small farmers in case of unexpected hardship. It uses little time and water and money to produce. Sumitra and I are adding it to our cultivation plan so we have a fallback in case of drought . But I wouldn’t even be in the position to do this production, if I hadn’t had the piglets from Caritas India. A little can change a lot.”