Fish that is cruelty-free–for fishers

As part of Caritas’ “One Human Family, Food for All” campaign, we interviewed Father Bruno Ciceri about issues that fishers face as they work to bring us the food we eat. Father Bruno is part of the Apostleship of the Sea, an agency of the Catholic Church that provides practical and pastoral care to seafarers. 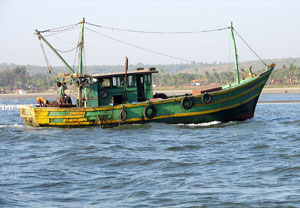 Fishing “is a difficult, dangerous profession,” says Father Bruno Ciceri of the Apostleship of the Sea.

Most people eat fish but don’t know much about the fishing industry. What should we know?

It’s a difficult, dangerous profession with one of the highest death rates in the world. There are a lot of occupational accidents too — people are left without a hand, for example. The living and working conditions on board of most the fishing vessels are terrible. We hear stories of abuses and exploitations everywhere, not only from Asian countries but also in places like New Zealand and Scotland.

How are fishers recruited?

The process is driven by poverty: there’s a promise of good wages. A man might be choosing between going hungry in his village or signing a contract to work on a fishing boat, hoping to earn good money for his family. The promises of the recruiting agent are very appealing.

Often fishers sign a contract in their country, but when they board the fishing vessel they are forced to sign another one that is completely different. They are entitled to very little benefits, have a low salary and must work long hours with any weather conditions.

Most of the fishing vessels are old and often lack basic safety equipment. The priority is not the people, it’s the cargo hold for the storage of the fish. Accommodation for the crew is reduced to a minimum and the small cabins are exposed to noise and fumes from the engine. The fishers don’t have a room where they can eat–they sit anywhere they can in the vessel, holding their plate with rice or a cup with instant noodles.

If you’re working on the boat and you find a school of fish, you can’t say, “Oh, it’s 6 pm, I have finished for today. I’m not going to continue to work.” You have to continue to fish and try to catch as many as you can. But after working continuously for 8 or 12 hours, you’re tired, you’re not careful and accidents happen.

For example, with squid, there’s a chain with a hook every 50 cm. The chain goes around and around. You’re up to your waist in squid, which are slippery. You can get a hook in your hand.

If you are in the hold storing the fish in the refrigerator and you don’t have proper clothing you risk frostbite.

And of course, you can face very rough seas.

What do fishers themselves eat when they are on the boat?

When a fishing boat is leaving the port there is a lot of food, but as the weeks and months pass, the supplies dwindle. Often they will eat only instant noodles and canned food until a different refrigerated ship arrives to pick up the catch and bring fuel and a new supply of food. Fresh water is used only for drinking and cooking. For taking a bath, brushing teeth, washing clothes, etc., sea water is used.

What other things do they lack?

In order to save time, the boats stay on the fishing grounds for months and months. We had fishers who stayed out at sea for more than 18 months, without having the opportunity to contact their families.

The supply of medicines is limited. Wounds can easily get infected. Once they run out of antibiotics and  painkillers, less traditional medicines are used. One time a fisher got a hook in his cheek just below his eye. It took 5 days for the vessel  to reach the nearest port. I asked his companions, “How did he managed to bear the pain?” They replied, “We kept him drunk.” 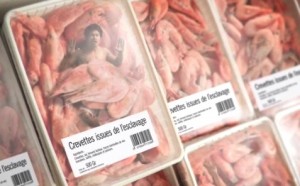 In Europe, a campaign protested the exploitation of fishers in the shrimp trade.

You said they are on small boats for a long time.  Do other problems arise?

In Europe we have other kind of problems. Two Filipino fishers went to Scotland to work as fishers with a regular contract. The company went bankrupt and their visas weren’t renewed. So they got arrested and deported.

Last year 72 Indonesian fishers were stranded for weeks in Cape Town, South Africa, because their vessels were arrested for Illegal, Unreported, Unregulated (IUU) fishing. Eventually they were arrested and deported back to their country without any salary.

How does the Apostleship of the Sea help fishers?

AOS helps fishers around the world in different ways. If they are stranded in foreign countries we provide shelter and legal representation to get their unpaid wages. If they were beaten and abused we support them in asking compensation. When they’re in port, we welcome them in our centres and offer them the opportunity to contact their loved ones.

The Work in Fishing Convention of the International Labour Organisation (ILO) was adopted in 2007. It’s meant to ensure that fishers have decent working conditions on board fishing vessels. It covers things like accommodation, food, safety, medical care and social security. It applies to all fishers and fishing vessels engaged in commercial fishing operations. AOS is actively involved in getting this Convention ratified so that it will enter into force and be a tool to fight exploitation and abuses in the fishing industry.

So should we eat fish?

I like to eat fish. But we should be aware of the sufferings and hard work behind it.