Communities working as one to provide food in Sierra Leone 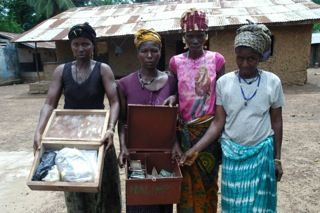 “After the war we started from scratch,” explains Samuel Conteh. “We began working together in a way that was completely new. Before, every family laboured to provide its own food – now we work, earn and save as one. ”

Communal farming helped the village of Malimp near the regional centre of Makeni in Sierra Leone, recover from a decade of civil war and to grow into a community which can feed itself and generate a surplus to sell.

“We started a group called Tamarrsu, “continues Samuel, the head of the village. “It means, ‘help us’. There were 10 men and 10 women farmers and, with a lot of elderly people and orphans to feed as well as ourselves, we knew we wouldn’t survive as a village unless we worked, harvested and sold our produce together.  We did new things, like sharing the profits and distributing the work fairly among the men and women.”  The association still exists, supported by a societal organisation called MADAM in Makeni, which is a partner of Cordaid (Caritas Netherlands).

With the help of MADAM, a second group was set up in 2009 called Teitaankoloh –  ‘good business’. This bonded together younger and older farmers, so that experience would not be lost and new ideas brought in. It also helped reintegrate villagers who had fled during the war or who had been abducted and made to fight by the warring sides.  Farming experts from MADAM helped the villagers of Malimp work together, to keep discussing things collectively and to change the poorly productive sowing and harvesting systems – which were once considered sacred.

Cassava, rice, palm oil and fruit farmers have diversified into new crops and have even been able to outsmart persistent locusts. “We always used to plant our cassava in November and December,” says Brima Bangura the chairman of Teitaankoloh. “But now we plant in April and May, before the locusts appear, as it gives the cassava a chance to grow. “ MADAM also gave the farmers a new variety of cassava, which grows in 6 rather than 12 months, and taught them crop rotation between cassava and groundnuts so the soil is not depleted as much.  This has both increased food security and produced a marketable surplus.

During the war, Brima managed to escape the rebels who abducted many of the boys and young men from Malimp. Today he farms 5 acres of his own land and works on 11 acres of community land.  His older brother Kappr was not so lucky – the rebels managed to hold on to him, after killing the other 7 boys abducted with him in one of many deadly raids in front of him.  “For 5 years I was their prisoner, beaten and drugged and forced to kill,” says Kappr Bangura. “I made it back home at the end of the war. I am lame and disturbed now though and I just can’t work in the fields, thought I’ve tried. But the whole village is supporting me until I can recover. I don’t go hungry.”

Malimp maintains an emergency fund to help vulnerable members of the community like Kappr. It’s possible because there is now surplus food to sell and because of a new transparent and efficient communal banking system – run exclusively by women. This – and equal access to communal farming land – has changed the social fabric of Malimp.  “Today men and women work the fields together, weeding, pruning, planting, harvesting, you name it. This never happened before – you’d never see any men in the fields,” says one of the women bankers.

Another woman nods. “We used to do everything and then had to beg for housekeeping money. It’s better and fairer now, thanks to the farmers’ associations that distribute the responsibilities equally.”

Village head Samuel Conteh agrees. “We can harvest more and make products that sell well at the market, such as gari, flour or starch, all of which are cassava products. We get a better price and have more to eat in the village. We also save more. MADAM has also given us good information, such as the obligation for the Ministry of Agriculture to provide rice and cassava seeds on a loan basis. With our own determination and some outside help and advice, we have resurrected Malimp.”