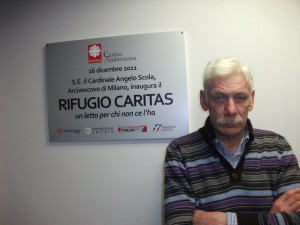 A little girl from Milan wrote to Santa this year saying how she’d like to a have a grandfather to share Christmas with. But it wasn’t Santa who answered her wish, it was Caritas.

“I’d love to have a grandfather who could wait up with me on Christmas Eve,” wrote 10-year-old Arianna.

Arianna’s mother, Roberta, remembered an advert for Caritas Milan’s* ‘Bread shared with those who have none is better than lobster’.

The initiative encourages the people of the archdiocese of Milan to invite those who are vulnerable and in difficulty to their homes to share a meal during the festive period. Caritas then puts families in contact with people who have sought help from them.

Roberta called Caritas and they introduced her to Renzo Pozzati, 60. He had come to the Caritas hostel in Milan a month before.  He’d lost his job as a waiter in 2013 and as a result ended up homeless because he couldn’t pay his rent.

Unemployment in Italy is at its highest level since the late 1970s and almost five million people (out of a population of over 61 million) live in absolute poverty and struggle to afford basics such as food and healthcare.
Caritas Milan runs soup kitchens and shelters, provides loans for people who are in difficulty, helps people find work, as well as offering advice and training for people in economic difficult.

“It was a special evening,” said Renzo of his Christmas Even with the Zigliolis. “The Ziglioli family didn’t even know who I was but they generously welcomed me. While I was chatting with Mrs Ziglioli’s husband, it turned out that he knew of a restaurant owner who was looking for waiters and he’s offered to take me there to see about getting a job.”

During his homily on Christmas Day, Cardinal Angelo Scola, Archbishop of Milan said, “Sharing, hospitality and friendship which give way to solidarity are all needed to come through this difficult period together.”

The Caritas confederation launched the campaign ‘One Human Family, Food for All’ at the end of 2013 with the aim of ending hunger by 2025. Over 840 million people in the world are hungry and yet there’s enough food for everyone. What is all the more shocking is that people are even going hungry in rich countries such as Italy.

The experience of Arianna, Roberta and Renzo is a great example of how large the human family really is. It also shows that in the face of the grave difficulties faced by millions of people in the world today, one of the simplest ways to welcome people into this family is by breaking bread together.